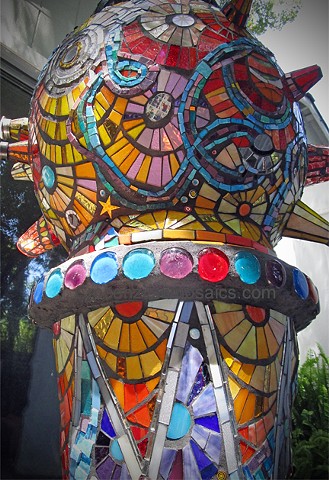 "There is no death, only a change of worlds." -Chief Seattle

I spent a good portion of 2020 creating this piece for a brilliant friend Amy, who I have loved, and admired since high school. She lost her husband Bob recently and commissioned me to create a memorial piece in his honor. So(u)lar Star depicts Bob, Amy and their son Spencer traveling through space and time in a rocket-ship. The movie Galaxy Quest was a favorite of the family's, and Bob himself was a man of warmth, wit, and good humor, so rather than creating something serious, I went in a more big-picture, we're-all-stardust, smile-inducing direction.

The main piece is our great star, the sun (complete with projectile sun flares :), with many celestial bodies on it, such as the planets, meteors, stars, flying saucers, and a spiral galaxy. And of course, the family rocket-ship appears many times; the trail that it leaves behind is blue (Bob), purple (Amy), and teal (Spencer). It begins on the lower portion of the pedestal and ends its travels circling around the ring at the top.

Other features to be found on the pull-toy pedestal: four phases of the moon (Bob was lunar in nature, too, of course.:-)), swirling primordial galaxies, and sun rays.

And the topmost part: the ring of endless light (nod to Madeleine L'engle's Wrinkle in Time) that holds a beautiful hand-blown glass heart. This heart (Amy had it made) has Bob's ashes floating in it. Suspended inside the mirrored ring, it is a light-loving symbol of the never-ending bond between these three people (and bonus: it glows in the dark!).

Throughout the piece, you can find many of Bob's treasured objects like the Star of David and Chai glass gems and beautiful camera lenses and hardware. I also included a few special photos of the three of them.

If you are interested in the making of this piece, I've included several photos which begin at about 2:00.

Huge thanks to Amy and Spencer for trusting me to create something so meaningful. ~Susan

Feel free to drop me an email if you'd like to talk about commissioning me. Thank you for watching! Click to see video about it, which also shows many work-in-progress pics.